From the uttermost end of the world. The New Zealand troops couldn't be further away from home. They literally carry their pride of their mother country with them at the front line: their hat with the peculiar shape is nicknamed lemon squeezer. But the story goes that its shape comes from Mount Taranaki, a volcano in New Zealand. The New Zealand army does not only have simple soldiers. In its ranks, we also find Dave Gallaher, who in 1906 was captain of the Original All Blacks, the legendary New Zealand rugby team. Gallaher dies when he is 43, in the Battle of Passchendaele. The objects you see here were found close to the Korek Farm in ‘s Graventafel, the place where he was fatally injured. 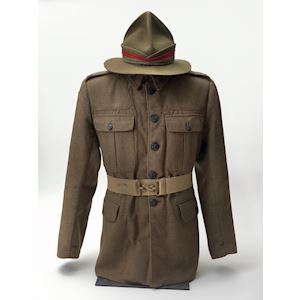