This work of art, Falls the Shadow, was made by the New Zealand artist Helen Pollock, whose father fought in the First World War. She made it with clay from Zonnebeke and New Zealand. Many troops didn't die through enemy actions, but drowned in the mud sea around Ypres. Arms are sticking up, symbolizing the senseless sacrifice of these soldiers. At the same time, it is a plea for a different world. But you can also see the arms as a symbol of power, of new growth, of the invincibility of the human mind. A powerful symbol of peace and rebirth. 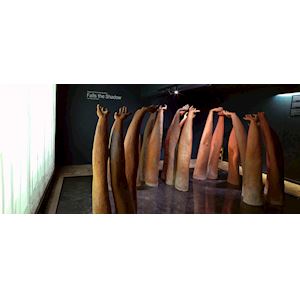