Jesus’s death on the cross is the central theme of Christianity: through his sacrificial death Jesus Christ, the Son of God, liberates humanity from evil. Two days later he rises from the dead. The crucifixion is the most portrayed scene in Christian painting. Here you see this four times. The heavily populated drawing is by someone from Van Eyck’s close circle. It is made with a gold and silver pen, the predecessors to our pencil. You can draw very detailed with it. We see the moment in which a Roman guard pierces Jesus’s side with a spear in order to determine his death. Look at the ugly faces of Jesus’s tormentors. In the foreground, Christ’s grieving loved ones are mourning him. Perhaps this is a detailed sketch for a painting? In this way patrons can get a good idea of what the final painting will be. Drawing is also important for Van Eyck as a way of immediately recording what he is perceiving. However, because drawings don’t count as real works of art, only few were preserved. Those that did survive, were often designated for use by studio employees. The three little panels are copies of a lost original by Van Eyck. Two of them are nearly identical: Mary, the mother of Jesus, stands next to the cross and his favourite pupil, John. To the left those faithful to Jesus appear, to the right, the tormentors and spectators are leaving the horrible place. In the background: the fictitious Jerusalem, in one version it is completed, in the other it is not. The third panel is more austere, with the intensely grieving Mary and John, the noticeably naked Christ and again Jerusalem in the background. 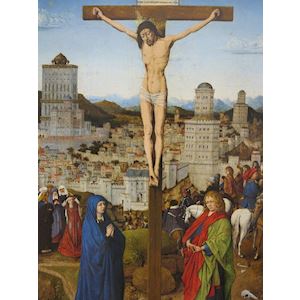 On February 1st 2020, the Museum of Fine Arts Ghent opened the largest Jan van Eyck exhibition in history: 'Van Eyck. An Optical Revolution'. Half of his oeuvre travelled to Ghent, where it was brought together with work from Van Eyck's studio, copies of paintings that have since disappeared and more than 100 masterpieces from the late Middle Ages. Due to the precautions taken against the further spread of COVID-19, the internationally acclaimed exhibition is unfortunately currently closed. Therefore, we would like to make the audio guide belonging to the exhibition available online. In this way the listener can still get a little closer to the work of the master. Have fun listening!